This week our school is doing several activities for Bullying Prevention and Awareness Month.

In class today, I read I Want My Hat Back by Jon Klassen 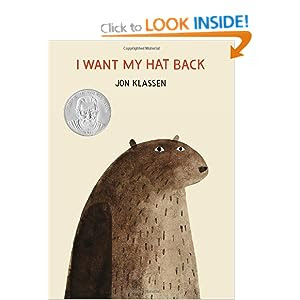 I thought it would be great because I've been hearing a lot of 'somebody took my.....' and because it might help prompt some discussion about the difference between bullying and conflict and how we can Stand Up rather than Stand By. Our slogan has been Choose Action.

I was quite taken back. These are seven year olds who thought that the bear should solve his problem with violence - despite the fact that we'd just watched a video and talked about 'choosing nonviolent responses'.

Some of the chanters said "but that's how we solve things in hockey" & "the bear has to make sure that the rabbit doesn't do it again - he has to stand up and not stand by".

This book has won the E.B. White Read Aloud Award and is a Theodor Seuss Geisel Honor Book. I've read it before, but didn't understand the book the same way that some of my grade 2 students did.

After some more discussion, I finished the story. Well, the chanting group loved it and cheered loudly. They were able to infer (because it isn't explicitly stated) that the bear ate the rabbit.

Not only does the bear eat the rabbit - he lies about it.

Once again, the lesson I planned for my students turned into some lessons for me, such as

- read more critically, think critically about the author's message & try to imagine how a group of 7 year olds might understand the book/lesson & many more!

Update: Today we went on a walking trip to the public library. The librarian read the book That is Not a Good Idea by Mo Willems SPOILER ALERT*** The duck boils the wolf and makes soup for the ducklings.

There is a lot of talk about the violence in video games that kids play 'these days', but now that I'm seeing stories through the eyes of seven-year-old students, I'm noticing a lot of violence used in the service of sending a message.

As an adult, I guess I've been getting the messages without thinking critically about the way that the message is delivered, or the way that younger children might interpret the message differently than I do. I survived the violent stories of my childhood, like Little Red Riding Hood (wolf tries to eat girl but gets chopped to pieces by a huntsman with an axe) and The 3 Little Pigs (who almost get killed by wolf but then they boil him alive), etc. and I 'turned out alright', but I'll definitely be reading children's books more critically from now on.