Today we started the novel Mary McGuire as part of The Global Read Aloud.

In Chapter 1 we are introduced to the main character, Marty McGuire, who is a bit of a tomboy. The teacher announces that the class will be doing a play of The Frog Prince.

A Term One focus for our grade 2s is to be able to retell a story, so we read a version of The Frog Prince fairy tale. Students then had the choice to retell the story in pictures and words, orally, or to use the puppet print-outs from the BBC's CBeebies website. The puppet option was the favourite. 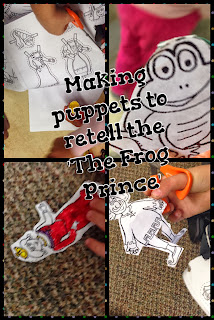 Students formed their own groups and had the task of coming up with a plan. They decided who would cut out and colour each puppet, which backgrounds they would use, and who would be in charge of the voice for each puppet.

A few students had the idea to film the puppet shows and to put them onto YouTube. Someone in class said that they think that their video will go viral :) We will continue to work on the puppets and backgrounds this week and then we will start video taping the performances.

Stay tuned for the videos!!