Tina Zita, Matthew Oldridge, Jason Richea and I are thinking about the 6 C's and coming up with a definition  for each C that is 6 words or less. Here are the definitions that we each came up with this week for Critical Thinking.


Jason Richea - Critical Thinking = Why we Do What we Do


Please follow my colleagues on Twitter & check out their blogs. It would be great if you would join the conversation :)


Yonnette Dey is a PDSB VP and was my Course Director at York University's Faculty of Education - Urban Diversity Program. She has taught me so much about critical thinking - here is her definition via Twitter 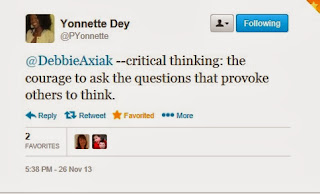 Here is some of the thinking that led to our definitions:

I was raised in a home where children were supposed to be seen and not heard, during a time when good little girls didn’t ask questions or disagree with adults. I developed the ability to be critical, but didn’t develop good critical thinking skills. My husband on the other hand seems to naturally be a critical thinker. He analyzes every angle, digs deeper by asking great questions, uses logic more often than gut feeling, and is open minded enough to change his original position after weighing all of the facts.

I began to develop a better capacity for critical thinking when I became a parent and later went to university and took a Logic / Philosophy course which was a huge eye & mind opener. At York University’s Urban Diversity Teacher Education Program, where the focus was on Social Justice, Equity & Diversity, I learned about the work of Paulo Freire - Critical Literacy & Critical Pedagogy - about  ‘learning to read the world’ and further developed my Critical Thinking skills.

I've still got a way to go, but along the way I’m helping students by teaching them to dig deeper and ask better questions, to disagree in an agreeable way, and to value themselves by gathering and analyzing evidence so that they can make good decisions.


I was first challenged on my conception of critical thinking as part of a module in a Western Master’s course.  Coming up with a workable definition was a challenge.  The education system uses jargon as a shield against the world.  We insist on overcomplicated frameworks and definitions that render concepts amorphous, and possibly strip them of their meaning. Jargon obscures more than it reveals.


Critical thinking is a case in point. We see and hear it peppered throughout gifted IEPs, or held up as some elusive and “out there” goal, that only some of us will reach, or a final higher state of being (a higher being who has “higher order thinking skills”).  We know it when we see it or hear it, but we can’t really explain WHAT IT IS.


Perhaps none of us believe in any kind of fixed mindset thinking any more. I still believe we need the most inclusive and equitable definition of critical thinking we can get, one that all students can use.  So I offer you:  making sound judgements.


If I had to add two more words, I would say making sound judgements about texts (if we talk about “reading the world”, as my colleague Debbie does).  Learning how to think critically then, is using our information, attitudes, thoughts, and feelings to make the best possible judgement we can, in any given situation.

I have only recently begun to consider what critical thinking really means, and have thus shifted my focus on trying to develop this in my students. Up until this point I never really gave it much scrutiny; as I focused on the Knowledge component of students’ learning.  I wanted to ensure students ‘knew’ content and could tell me the terms, concepts, and theories. I wanted students to regurgitate studied information and demonstrate to me that they could remember key curriculum components. Why? Well this was what I was taught to be ‘learning’. Only to realize this to be a very erroneous assumption of learning.

I was always a curious child growing up - yes that annoying child who constantly asked the ‘Why’ about everything. I wanted to figure out how things work, tearing apart old radios and anything else that could be taken apart to understand the inner workings of things (I never figured it out, I just liked the destruction I think). As well, my elementary teachers couldn’t tell me to do things, without providing a reason first; and if I didn’t like their reasoning, I surely wasn’t about to do what they told me (which more often than not, provided me with a reason to visit the principals office on more than one occasion). However, I lost this somewhere. Somewhere along the way, I stopped asking those questions, and just did what I needed to get by. I believe this is an unfortunate part of our education system; or has traditionally been an unfortunate part. However, I believe the focus is now shifting dramatically away from a concentration on Knowledge, to a much greater focus on a true demonstration of learning.

Critical thinking is a much more accurate definition of learning really. The ability to describe ‘Why’ things happen, ‘How’ things happen, and the ‘Impacts’ of world happenings. In the ‘AG’ era (After Google), any student can search terms, concepts, and theories, and define them using their digital devices; but it’s much more difficult for a student to ‘Google’ the ‘How’, ‘Why’, and ‘Impacts’ of world happenings. This is why Critical Thinking is so crucially important.

When students are able to critically think, they are able to truly learn about issues, events, concepts, theories, and people from around the world. When students critically think about their own learning, they begin to realize why they perform such actions, create such assessments, and present in such ways. They begin to realize what THEY DO has an impact on the World around them. That to me, is true learning.
Critical Thinking = Why we Do What we Do

When we started this journey of exploring the 6Cs Critical Thinking seemed like the easy post till I had to write it. How do you get critical thinking into 6 words? What is critical thinking to begin with? As I walked past a Critical Literacy poster this week I was caught off guard. That couldn’t be critical thinking. It was more than just critical literacy (although it requires critical thought), it was bigger than an 11x17 sheet and needed to extended into every part of our day.

I think at it’s core critical thinking is questioning:


I think if our learners are to be critically literate they can’t just ask the questions but must also take action. The Kids React to series on youtube demonstrates that kids do this naturally (check out Kids React to Controversial Cheerios Commercial) even at a young age. Maybe I need to be less annoyed when I hear the constant WHY questions from my nephews and niece. We have to give our learners the opportunity to question in a safe environment.

In preparing our learners for the future, it is paramount that they can see past the obvious, that they don’t just accept what they hear or view, but use that critical lense when observing.